One way in which muscles can cause pain

Nerves connect muscles to the spinal cord.  When something stimulates your muscles, for example, if someone were to press on your arm, the muscle sends a message via the nerves first into the spinal cord, and then up to the brain.  Once the brain receives the message (in this case, that there is pressure on your arm), then your body is able to perceive sensation.  This all happens in a split second, so that your brain receives the message immediately after the stimulus appears.  When the sensation is strong enough it no longer feels like pressure or a simple touch; it is experienced, rather, as pain.    Once the brain processes the message, then you become aware of pain in your muscle.

Sometimes when we have pain in a region of the body we also experience stiffness or spasm. One proposed explanation for how this occurs, which is not entirely correct, is the pain-spasm-pain cycle.  This model theorizes that damage to the muscle sends a message to the spinal cord which responds by sending an electrical impulse reflexively back to the painful muscle telling it to contract and producing a spasm.    When a muscle spasms for too long, it squeezes blood vessels resulting in less blood (and oxygen) getting to that muscle.  Diminished oxygen irritates the muscle and nerves causing more pain, and further fuels the vicious cycle.  This sends a new message to the brain that damage has taken place, and the brain, receiving the message, perceives this as pain.  To summarize the pain-spasm-pain model, damage to a muscle sends a signal to the spinal cord which responds by sending a signal back to the painful muscle causing it to contract, producing a spasm.  The spasm creates more pain.

Lund showed that a pain producing muscle actually inhibits its own electrical activity, while, at the same time, increasing the activity in the antagonist. So the Lund Hypothesis says, a painful muscle suppresses its own contraction and stimulates the contraction of the antagonist. We believe this mechanism exists to inhibit movement and maximum effort in an injured muscle, giving it a better chance to heal. Although these adjustments can promote healing in the injured muscle by reducing the amount of work, they can also create additional problems by causing other muscles to take over a job for which they are not suited. 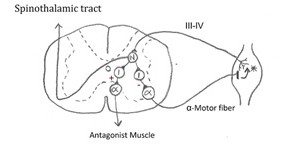 Just as in the pain-spasm-pain cycle, too much contraction (spasm) for an extended amount of time can decrease the amount of blood flow to a muscle.  Blood provides the oxygen and nutrients a muscle needs to be healthy and functioning.  Without it, the muscle tissue can become altered.  Now, in addition to original muscle pain in the agonist, the antagonist may have become irritated and painful as well.  The Lund hypothesis and the pain-spasm-pain cycle both predict that pain will cause an increase in electrical activity of a muscle, but the Lund hypothesis (the more correct model), shows that the increased activity takes place not in the painful muscle, but in the muscle that opposes it.  This is one mechanism by which muscle pain can spread and persist; other ways will be discussed in future blogs.