Alisyn Camerota reports on how a new back pain treatment avoided surgery in one young woman and relieved pain in another, who suffered back pain after surgery.

Karen, a distance runner and young mother, had persistent lower back pain. She could not sit without severe pain. She had partial, temporary relief with epidural steroid injections but nevertheless, continued to experience muscle spasms that would prevent her from standing erect. Not wanting to undergo suggested surgery, she saw Dr. Marcus for evaluation. He identified muscles in her low back and buttocks that were causing her pain. She received injections into the muscle tissue as well as into the areas where the muscle attaches to the tendon and the tendon attaches to the bone. Following the injections Karen did the prescribed exercises and is pain free for more than 3 years without the need for additional treatment.

Marissa in contrast had extensive spine surgery to fuse her spine. Although the fusion itself was successful, it did not reduce her back pain. She was confined to bed for more than a year. Her diagnosis was Failed Back Surgery Syndrome and the outlook was grim. When she was evaluated by Dr. Marcus, specific muscles in her low back and buttocks were found to be a source of much of her pain. After treatment, she has regained her active life.

These examples of how muscles were the source of pain demonstrate that no matter what you have been told is the reason for your pain, if your muscles are not evaluated, you may be overlooking a major cause.

Dr. Marcus is a media favorite and frequent guest on national television having shared his expertise in the treatment and management of pain on The Today Show, CBS, This Morning, Good Morning America, Fox & Friends, and The Early Show. 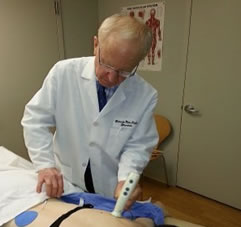 How neck pain affects your walking
A recent study done in Turkey took a look at the walking patterns of chronic pain patients- ideopathic neck pain, to be specific. They based their hyp...
read more...

If you or someone you love has been suffering with back pain, End Back Pain Forever could change your life.

DR. NORMAN MARCUS IN THE NEWS